The concept for the library arch centers on the creation of a threshold for growth and on books as the foundation for community and compassion. The form of this threshold is a concrete post and lintel gateway made up of books representative of the neighborhood’s rich cultural diversity.

The design is based on an ancient form of construction called “Post and Lintel” which has been used all over the world and has inspired monumental arches from India Gate in New Delhi to the Arc de Triomphe in Paris. The structure of The Gateway and the units of books that comprise it symbolize the act of building foundations through education and building community through shared heritage.

The Gateway holds the space as a formidable structure while signifying solidity and stability. At the same time, the opening through the Gateway is an invitation for interactivity and the space through it gives the area dynamic directionality by creating an axis between the library and other nearby cultural institutions.

The opening in the gateway will act as threshold along a passageway. At the same time it will represent a place for transformation for the city, its local communities and its residents. By using an architectural form that symbolizes transition and creates a passageway and place that refers to both the contents of the library and the context of its diverse community, the Gateway will become a place for dialogue, reflection, inclusion, education and celebration.

The books that make up the portal will send a powerful message that education is the foundation for a strong community. As a form comprised of books, the Gateway will celebrate education, growth through reading and community cohesion because books are a powerful vehicle for the sharing of diverse heritages across language and cultural barriers.

The books’ spines will bear titles that reflect the community‘s past and current cultures. Titles by Hispanic writers, especially Puerto Rican writers, will be represented as well as those by authors representing Haiti, Cuba, Jamaica, Dominican Republic, China, Korea, and many other cultures. Local writers of note and books written in Hartford will also be represented in the Gateway, including Noah Webster’s dictionary, Uncle Tom’s Cabin by Harriet Beecher Stowe, Wallace Stevens’ poetry collections and Mark Twain’s Adventures of Tom Sawyer.

The Gateway will be a space for reflection on shared heritage and on the significant role that the Public Library plays as a community jewel and it will become a place of ritual around which new traditions begin, where neighborhood groups meet and children play. 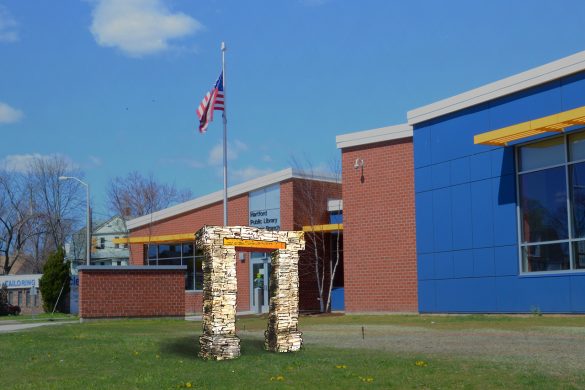 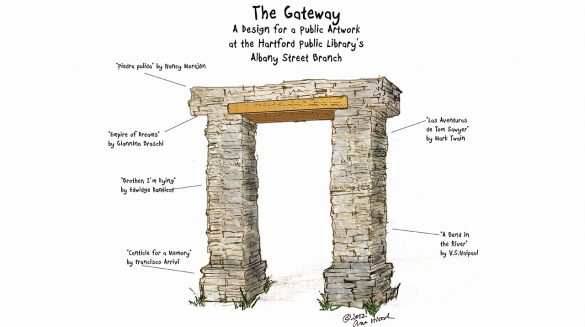