Reading Figures is a series of wall sculptures that are suspended between repre­sentation and abstraction; the sculptures shift from random patterns on vertical bands dramatized by raking cast shadows to narratives of walking, reading figures seen as if from a bird’s eye view. The figures are 15 variations on the same figure, a robed, monk-like individual. The repetition of the same figure conflates the individual with the collective. As popula­tions of nearly identical units, the figures address our capacity to communicate with ourselves and with one another.

The Philosopher Ruler draws on Plato’s The Republic and Socrates’ “Analogy of the Cave”. The sculpture is a small stage set and miniature installation from which we are physically divorced by scale, yet which we can enter visually. The location of the proscenium and the other implied two walls of the space are ambiguous; the proscenium can be before the front edge of the piece, in front of the figures behind the screen or behind the viewer. The picture plane, or the possible proscenium, of the stage has been rotated into the space of the sculpture and away from the viewer so that in order for the viewer to understand the perspective, his/her line of sight must be rotated away from the center as well. The sight lines, in other words are not contiguous with the viewers’ sight lines as in a painting. The shifting of the room also exposes an access point to the figures behind the screen on the left side of the ‘stage’. The identity of the two primary actors in the foreground is ambiguous: Which one of the two is the “Philosopher Ruler”? They simultaneously frame and are framed by both the environment, the watchers behind the screen and the viewer as one’s gaze shifts around the piece. The standing figure, who is about to hang a frame on the screen, frames a watcher behind the screen as well as his/her own shadow portrait:  Some way off, behind and higher up, a fire is burning, and between the fire and the prisoners and above them runs a road, in front of which a curtain-wall has been built, like the screen at puppet shows between the operators and their audience, above which they show the puppets. (Socrates, Part VII, Book Seven of Plato’s The Republic)

Thresholds is a series of photographs mounted in frames that include groups of three dimensional figures only seen by looking at the photograph from the side. These figures, trapped in the literal frame of the photograph, are also the subjects of the photograph. The frame is a place between two zones – that of the real and the imaginary, or the 2D and the 3D.  The two dimensional subjects in the frame seek out their three-dimensional selves in the space in between. They may see themselves or they may be looking through doorways beyond which there is only the imagined in darkness. Or the figure may recognize itself across the threshold of the doorway as if in a mirror. 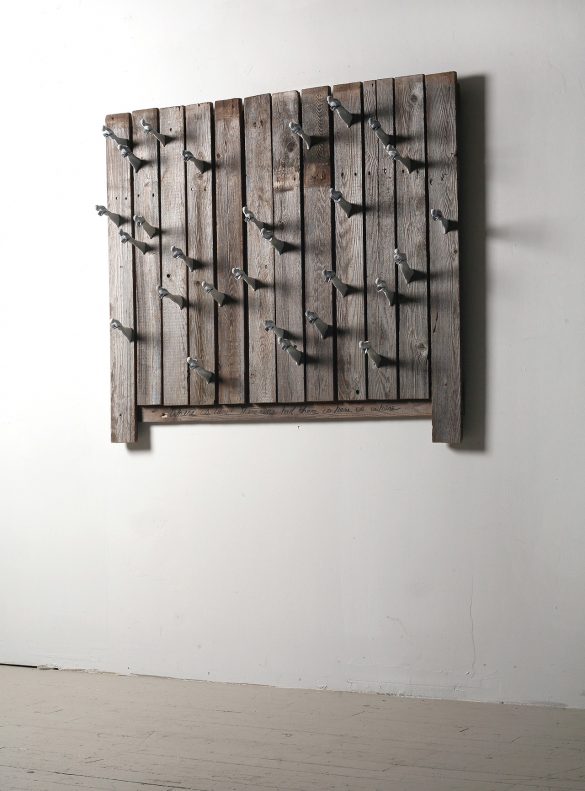 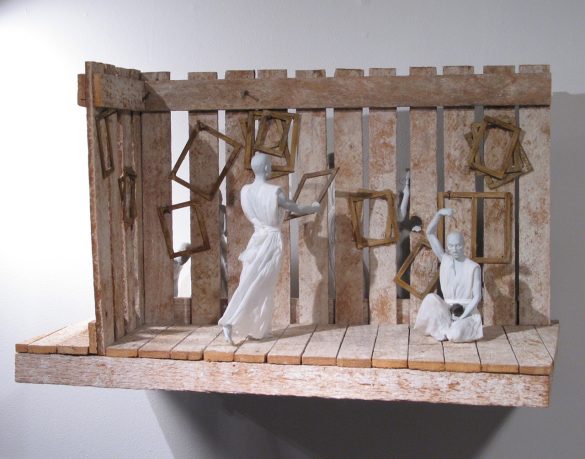 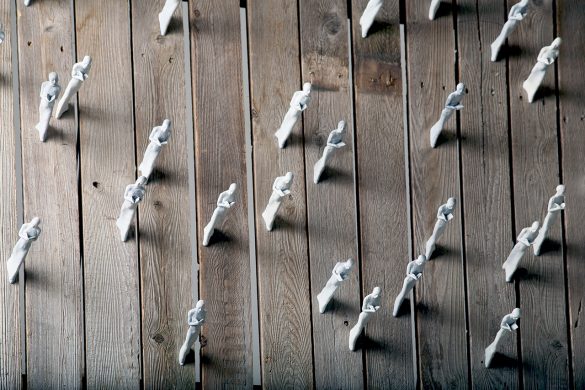 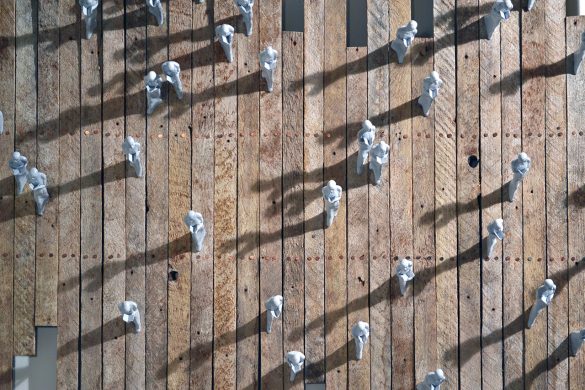 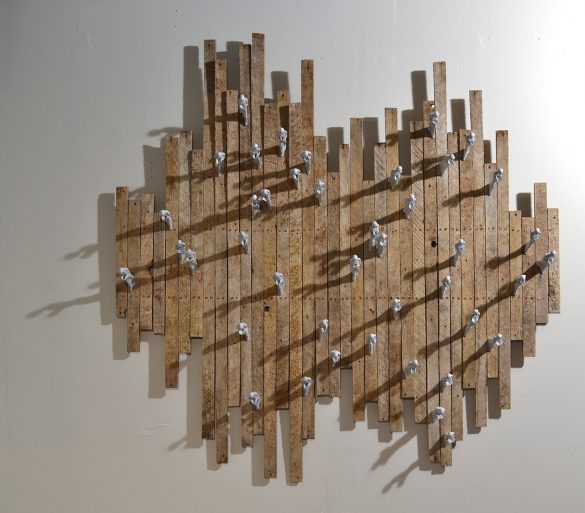 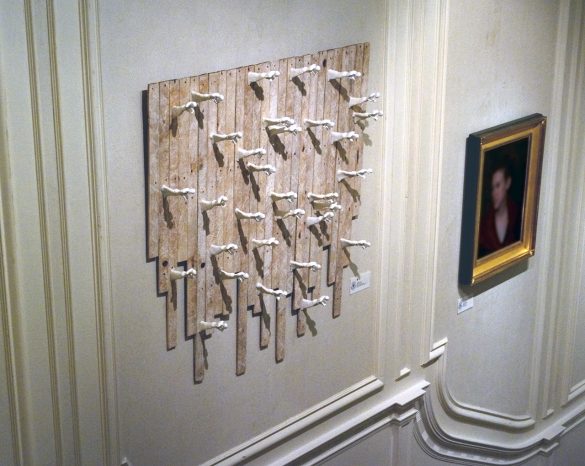 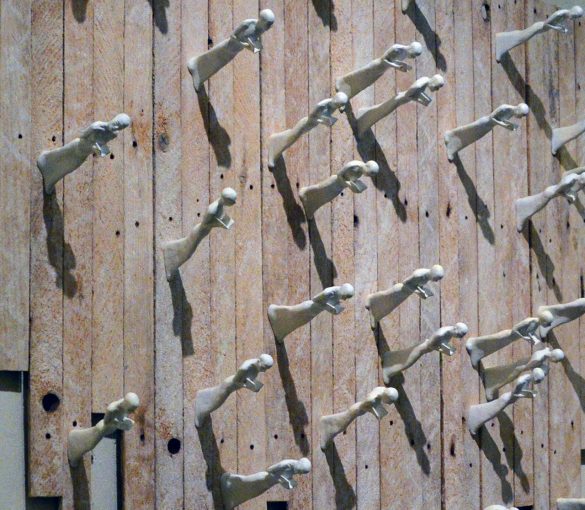 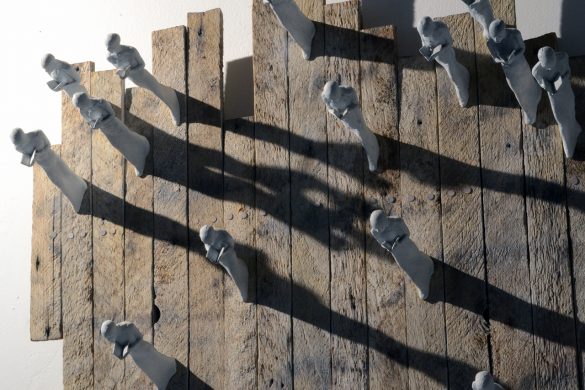 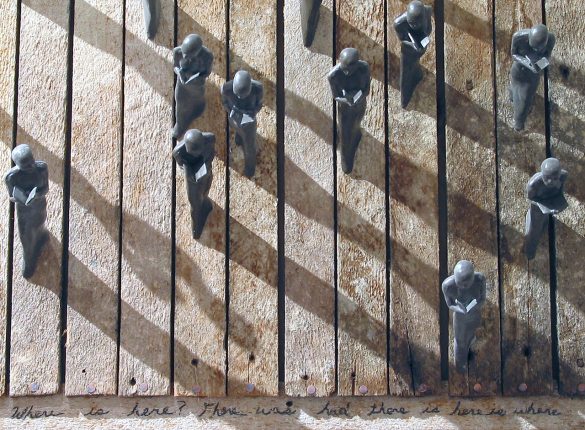 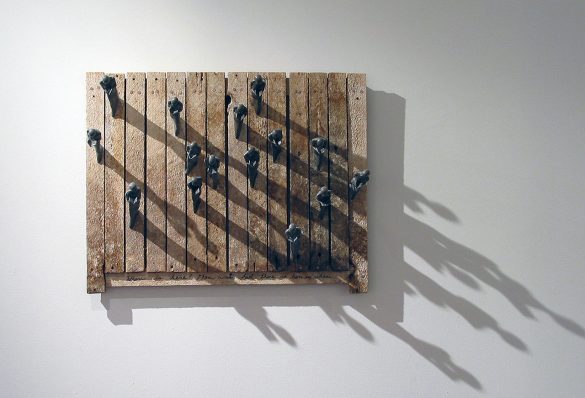