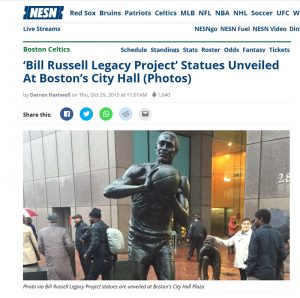 “Almost two years ago to the day, a crowd gathered around under overcast, rainy skies to witness Russell’s statue get unveiled in Boston’s City Hall Plaza. The bust in his honor was the first phase of the Bill Russell Legacy Project, which aims to honor Russell’s contributions as a player, a human rights advocate and a mentor to young children in the Boston community. On Wednesday afternoon, ahead of Boston’s season opener against the Philadelphia 76ers, Phase Two of the project was unveiled amid similarly dreary weather.”