The tide and the river: an interview with SOS (Safety Orange Swimmers) ArtPrize artist Ann Hirsch by Kevin Buist 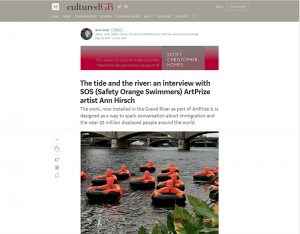 A+J Art and Design, a collaborative team based in Boston, are one of the recipients of the ArtPrize Featured Public Projects grants this year. Ann Hirsch and Jeremy Angier’s project will be one of two entries in the Grand River. As a way to highlight some of the stories behind the development of the dozens of projects that received grants this year, I decided to mail a small questionnaire to artists that we could then publish on the ArtPrize Blog. Ann and Jeremy responded by asking if we could have a longer conversation about their work and the shifting realities of immigration, which their work explores, as well as the political forces challenging the country — and even ArtPrize itself. I happily agreed.

For context, it’s relevant to note that we spoke on September 6, 2017, the day after Attorney General Jeff Sessions announced that DACA would be rescinded, and in between Hurricanes Harvey and Irma. The conversation has been edited for length and clarity.